Readers of The Sceptre, a historical novel of the 1930s by Dorothy Jane Mills (a.k.a Dorothy Z. Seymour), say the book is “thrilling,” “riveting,” and they “can’t put it down.” Reviewers call it “a gripping story, well told, one that “demonstrates tremendous research…an irresistible tale,” calling the main character “a heroine in the classic mold…with determination and focus.”

The Sceptre gives us the adventures of Katya Becker, an Austrian immigrant to Cleveland, who returns to her homeland to research the meaning of two ancient symbols she once saw in a prehistoric salt mine. While there she uncovers a Nazi plot to disrupt the Salzburg Festival of 1935 by kidnapping Maestro Toscanini. Through Katya’s search she gradually discovers an unexpected connection to the man she loves and to her ancient ancestors.

Two dramatic flashbacks to Keltic Europe of 600 B.C. disclose to the reader the Keltic origin of the sceptre in the title.

The story’s theme is that we look and act much like our ancestors, and that in the early, ancient past our forebears were more closely interconnected by bloodlines than we want to think. Like Katya Becker, we may be descended from, and related to, persons we’d just as soon not know about. The Sceptre thus rides the current craze for genealogical research. We all want to know where we fit into history.

Based on ten years of research into authentic events of the 1930s as well as ancient Keltic history, The Sceptre includes cameo appearances by real persons of the 1930s like Maestro Arturo Toscanini, the fashion photographer Cecil Beaton, psychoanalyst C.G. Jung, the high-fashion designer Elsa Schiaparelli, Prince von Starhemberg (who was then Vice Chancellor of Austria), and Nora Joyce, wife of James, the writer. And others!

In 2012 The Sceptre was republished as an eBook by Thinker Media. It is available for eReaders such as the Kindle or the Nook, or through Kobo Books or iTunes.

In this sequel to the historical novel The Sceptre, Austrian immigrant Katya Becker, learning in 1938 of Germany’s threat to invade her old homeland, returns to Europe and comes face to face with Hitler. She helps relay German invasion plans to Eleanor Roosevelt and unearths spies in Hawaii. While discovering her own tangled heritage, she also learns of her new lover’s secret role.

In 2012 The Labyrinth was republished as an eBook by Thinker Media. It is available for eReaders such as the Kindle or the Nook, or through Kobo Books or on the iPad through the Amazon Kindle app.

The final book about the Austrian designer and part-time spy, Katya
Becker, brings her back to Europe in the spring of 1938 despite the
danger of scheduled contacts with Benito Mussolini and his guest in
Italy, Adolf Hitler. Through her clever tactics on a tension-laden train ride, Katya aids in the escape of a famous scientist from Fascist
Italy. In Ireland she meets two fascinating men, and back home she is threatened by German Nazis before being rescued by the man she wants for a life partner.

As in The Sceptre and The Labyrinth, this book contains two exciting flashbacks to ancient Europe foreshadowing the events in 1938 Italy and revealing the meaning of the treskel symbol uniting past and present in representing feminine strength.

In 2012 The Treskel was republished as an eBook by Thinker Media. It is available for eReaders such as the Kindle or the Nook, or through Kobo Books or on the iPad through the Amazon Kindle app. 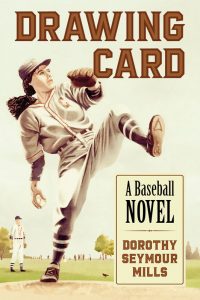 My next book is now available from McFarland. You can order an autographed copy directly from me.

Drawing Card has already created a buzz of interest among those interested in baseball history. It’s the story of a woman who signed a minor-league baseball contract, which was then cancelled by the Commissioner of Baseball, and what she did about it.

In baseball history, two different female baseball players signed minor-league contracts, which were cancelled as soon as their gender became known, so they never had a chance to show what they could do. Evidently, they withdrew quietly and politely, as women generally did in those days.

Annie’s volatile personality, coupled with her family background in ancient Sicily (shown in historical flashbacks), leads her to plan his murder.

Before she can complete her scheme, her attempt to help a brother in trouble leads to her participation in a different murder, one in which the Mafia has an interest.

Most of Drawing Card takes place in Cleveland, Ohio, where I grew up. If you know the city, you’ll recognize the landmarks.

A few baseball specialists are reading the unedited manuscript of Drawing Card. One has reacted to his reading this way: “Wonderful, wonderful! Couldn’t put it down until my eyes were closing each night.” He calls the book “extraordinary” and “compelling.”

I think you’ll find Drawing Card to be fascinating. I know that when you read it, you’ll learn something about baseball history and of course about women’s history.

Read a preview of the book from the Ft. Myers (Fla.) News-Press.

Read reviews of the book from Florida Weekly,  SABR members on the McFarland website and reviews from Amazon.com.

Drawing Card is also available as an eBook through McFarland.

More praise for Drawing Card:
The book is “incident-packed,” and “the novel’s incidents are nicely unrestrained, often sinister in a way that borders on black comedy.”

The heroine, Annie Cardello, is “believable as the ‘drawing card’ of the title, pitching local baseball in Cleveland, exemplifying her Sicilian roots.”

“This is a woman whose answer to a mildly disappointing marriage is a quickie divorce, Italian style. One is prepared for her to wreak havoc on Organized Baseball.”

“As a contribution to the re-imagination of the twentieth century from once-elided perspectives, the novel has something to offer readers who like their fiction brisk, lucid, and vividly imaginary.”
— Tim Morris, Review of Drawing Card in NINE: A Journal of Baseball History & Culture, Vol. 21 No. 1, pp. 176-177.