As the widow of Dr. Harold Seymour, the first and leading historian of baseball, I was for 40 years closely involved with the field of baseball history, doing his research, organization, correspondence, and even a lot of his writing.

The Groundbreaking Three-Volume History of Baseball

This first volume covers the earliest play in the U.S. and baseball’s development from an amateur pastime into a professional sport, with establishment of a commission in 1903. Expanded and revised from Seymour’s Ph.D. dissertation for Cornell University.

This second volume covers development of the major leagues, clubs, and players to 1930, including all the important baseball events of the period, like the Black Sox Scandal of 1919.

The National Baseball Hall of Fame also recognized my work on the series with a tribute as part of its Daily Diamonds stories.

To discover the extent of my contribution to the field of baseball history, see my article, “A Woman’s Work,” originally published by the literary e-zine BlueEar.com. After publication of this article, I was asked by McFarland and Company, Publishers, to expand on it by writing my autobiography as the first woman to write baseball history. McFarland published it in Spring of 2004 as A Woman’s Work: Writing Baseball History with Harold Seymour. Read about this book.

First in the Field: My Journey as the First Woman Baseball Historian

How does it feel to be the first woman in any field? That depends on whether anyone is actually aware of your work! For a long time, nobody knew that I was a full partner with Harold Seymour in writing baseball history, particularly on the Oxford University Press series that were attributed only to him — until Oxford decided to let the world know about it.

The editor of Thinker Media (BestThinking.com) asked me to write what it was like to spend most of my writing career in relative obscurity. First in the Field, published in January 2012, is an eBook single, an 8,000-word essay about my baseball life that can be downloaded for the Kindle (amazon.com), Nook (bn.com), through Kobo Books (kobobooks.com) or through iTunes.

An Amazon reviewer gave First in the Field top rating and said, “The author, through her determination, freed herself from a subordinate role of the traditional woman while many other women of her generation never reached that point. … Dorothy Mills does it well.”

Activist and author Gloria Feldt also reviewed the eBook, saying, “This small book is first and foremost not a polemic but the story of how one woman persevered, found ways to use her considerable talents despite social and personal constraints, and finally settled the score by claiming credit on her own terms.” Read the full review.

In 2010 the Society for American Baseball Research included Harold Seymour as one of the winners of the Henry Chadwick Award, mentioning me only in a subordinate clause as “assisting” him. I objected to the wording, as did several other SABR members, especially members of the Committee on Women in Baseball. The Chadwick Committee then changed the wording of the award, bestowing it on both Seymour and me.

After interviewing me regarding the controversy, Alan Schwarz published this article in The New York Times.

When Oxford University Press became aware of this situation, it decided to take the unprecedented step of re-issuing our baseball trilogy with my name included as co-author, disseminating this release in explanation.

Later, CNN.com also interviewed me about my work on these volumes and published this story. 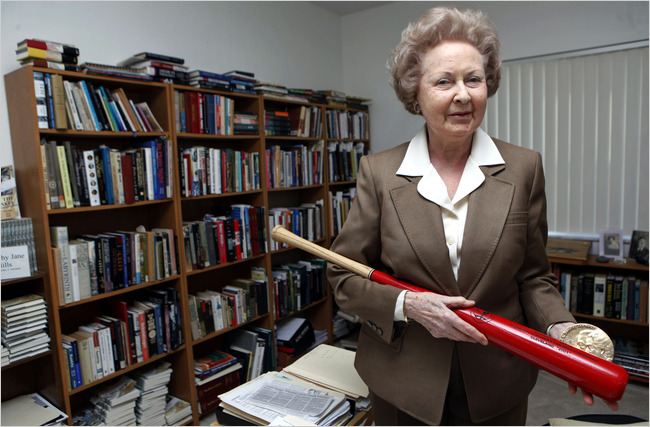 Each year the Society for American Baseball Research holds the Seymour Medal Conference to award a medal to the author of the best book of baseball history or biography published in the previous year. This Medal is named for Dr. Harold Seymour and me and is awarded in our honor. For complete details on The Seymour Medal, see www.drharoldseymour.com.

All the material collected for writing these three volumes, plus much more, is deposited at Cornell University. Known widely as the Seymour Collection, it is archived in the Carl A. Kroch Library, Ithaca, New York 14853, where it is listed as The Harold and Dorothy Seymour Papers. The archivist in charge is Elaine Engst, ee11@cornell.edu, phone 607-255-3530.

Besides attending the annual Seymour Conference – always a spring weekend affair – I also attend some meetings of the Naples, Florida, chapter of SABR, named after my late husband, Harold Seymour, and me. This chapter is hosted by Mel Poplock.

I also enjoy attending the annual national conference of SABR, held in a different city each year, where I not only seek out as many meetings as I can fit in but also renew my friendship with many baseball colleagues.

The five chapters on women’s baseball in Baseball: The People’s Game revealed the way women played in those early days. The chapters are called:

I performed all the research for these illuminating chapters and did much of the writing. You can get these books at your favorite online bookstore, or by contacting Oxford University Press.

If you prefer a personalized copy of Baseball: The People’s Game, or any of the three books, autographed by me, email me at dorothyjanemills1@gmail.com.

In the year 2000 a SABR committee on Women in Baseball selected me as one of the top 25 people in baseball. The list includes players, organizers, owners, and officials. I believe that I’m the only sports historian on the list. I presented the keynote address at the conference of Women in Baseball in Cleveland, Ohio, February 10-11, 2001.

In 2017, SABR’s Women in Baseball Committee established the Dorothy Seymour Mills Lifetime Achievement Award — called “The Dorothy” — named in my honor. Nominees are submitted each year and the award is given at the annual SABR convention.

With the strong editorial work of Dr. Leslie Heaphy, chairman of SABR’s Committee on Women in Baseball, the Encyclopedia of Women and Baseball was published by McFarland in 2006. In almost 450 pages this monumental reference work includes hundreds of biographical items about women players, women’s leagues and clubs, the women’s world series, and even tournament rosters. Information about contributors, a bibliography, and an index are included. My contribution to the Encyclopedia is an article about Elizabeth Murphy, an outstanding New England player of the early 1900s. The Encyclopedia also includes biographical note about many of the women now writing about players. A description of my own contribution to baseball is included.

Chasing Baseball: Our Obsession with Its History, Numbers, People and Places

Despite worries about baseball’s decline, deep interest in memorabilia, fantasy baseball, exhibits, and the games themselves indicate the sport is surviving steroid scandals, negative publicity, and the perception that the game is more nostalgia than a part of current popular culture. This book shows that while basketball and football might enjoy wider popularity today, no sport elicits the passion — or inspires the slightly off-kilter, obsessive behavior — that baseball does. Read about this book.

In baseball history, two different female baseball players signed minor-league contracts, which were cancelled as soon as their gender became known, so they never had a chance to show what they could do. In Drawing Card, when Baseball Commissioner Kenesaw Mountain Landis cancels Cleveland pitcher Annie Cardello’s signed minor-league contract, she vows to retaliate. This book and eBook are now available from McFarland. Read about this book.

I will be writing four guest articles for the National Pastime Museum, “a virtual collection of American baseball artifacts, artworks, literature, photographs, memorabilia, articles written by baseball historians, and other interactive features.” The first article is “Those Nimble American Girls,” the second is “Women and Men Together” and the third is “Why Can’t Women Play For Pay?” and the last is “Women Can Be Baseball Stars, Too.” I also wrote a contribution to the website’s series on favorite players, “My Favorite Player: Justine Siegal.”

I have begun writing guest articles for the baseball history website Seamheads.com. You can read “A Girl Is Embarrassed,” and “MLB Searches For Talent, But Not In The Right Places.”

One of my current baseball activities is to review baseball books for the New York Journal of Books, a respected online journal. You can find my reviews by looking at my author’s page at the NYJB, linked here.

For some time I have been helping the FBI identify baseball documents stolen from the New York Public Library. I learned about the problem from baseball historian Peter J. Nash, who conducts a web site called Hauls of Shame. So far the FBI has had only limited success. You can read about this situation at Peter’s site.

If you haven’t visited the Hall of Fame and its Library in Cooperstown, New York, you’ll be surprised at its wonderful displays appealing to the entire family. For learning about this, the web site to start with is http://www.baseballhalloffame.org

In June of 1995, in a solemn ceremony punctuated with humorous quotations from his books, the ashes of the late Dr. Harold Seymour were sprinkled on first base at Doubleday Field in Cooperstown. Now you know the answer to the question that Abbot and Costello made famous.

After the ceremony Professor George Grella of the University of Rochester wrote an account of the occasion and a tribute to Seymour that appeared in The National Pastime, a SABR publication. Professor Grella and the editor of the magazine have given permission to reprint this article, “Harold Seymour (1910-1992),” from The National Pastime #17 (1997), pages 128-130.

For much more on my relationship with baseball history, see DrHaroldSeymour.com.

The game of hopscotch has a history, too. Scholars believe it has ancient roots linked to initiation ceremonies for youth.

Curious about that history? I wrote the entry for hopscotch in the recently-published St. James Encyclopedia of Popular Culture (Farmington Hills, MI, 1999: St. James Press). Here it is:

Children in Europe and in North, Central, and South America, as well as in Russia, China, and India, play a hopping game in different forms and variously called hop-around, potsy, paradise, heaven and hell, airplane, and hop-round. Players toss an object into a pattern chalked on a sidewalk or traced in dirt, then hop into, through, and out of the pattern without touching the lines. The pattern is formed from a series of squares or circles, which are often numbered. In France, the pattern is snail-shaped, and the game is called escargot (snail). Danish children use heavy glass markers to throw into the pattern.

Scholars believe the game may be a thousand years old, suggesting that the pattern derives from the figure of the labyrinth, a motif found as far back as the iron age, one through which youth were required to walk during an initiation ceremony.

When the European Union tried to ban Danish children’s hopscotch stones, a couple of indignant Danish sports researchers started a movement against the EU and won! Read the story in “Banned in Denmark,” my Commonweal article of October 23, 1998, page 31. If you lack access to this magazine, contact me at dorothyjanemills1@gmail.com and I’ll send you a copy.

How could such a thing happen? A supernational association like the EU toppled by two researchers? And why would the EU try to ban kids’ toys anyway? Read all about it in “The Hopscotch Wars,” my article in Tampa Review: Literary Journal of Tampa, Spring/Summer 1999, pages 44-51. If you can’t find this magazine in your library, contact me at dorothyjanemills1@gmail.com.

An extremely popular cold-weather sport in Canada, curling probably originated in Scotland, where both men and women have enjoyed it for centuries. “Ladies do not curl,” asserted one writer in 1890, but he was dead wrong, for by the time he wrote those words one Scottish city alone boasted 42 women’s clubs.

Canadian women were at first expected merely to “watch hubby curl,” but before long they were playing, and nowadays women’s and mixed teams are widespread.

Want to find out about women’s curling? See my entry, “Curling,” pages 287-290 in the International Encyclopedia of Women & Sport, published in June of 2000 by Berkshire Reference Works in Great Barrington, Massachusetts. Your local library probably has a copy of this important new encyclopedia.